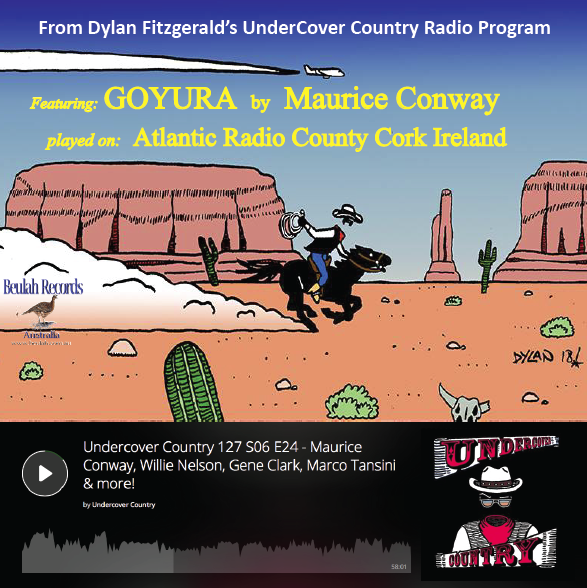 Maurice Conway's song - GOYURA, has made it to International Radio Airwaves and was played on the UNDERCOVER RADIO Program on Atlantic Radio in IRELAND - for obscure country music from around the world. Radio man and host, Dylan Fitzgerald, is highly regarded for his unique program and contacted Maurice this year for permission to play his music. This album is a production of this specific program and includes eleven songs that any musician would be proud to have been included.
These are:
1. Morning Train by Marco Tansini
2. The Story of Bonnie And Clyde by Flatt & Scruggs
3. The Pusher by Blind Melon
4. 7:30 Mode by Gene Clark
5. Goyura by Maurice Conway
6. You Are My Sunshine by Alan O’Bryant
7. Summertime by Willie Nelson
8. Bringing Mary Home by John Starling
9. Bells of Harlem by Jenny Keldie & Brian Cromarty
10. What’s the Matter by Commander Cody And His Lost Planet Airmen
11. A Street Called Hope by Ray Davies

Save this product for later